Back in 2010 our project team embarked on a project of content management unification of various web portals for Hanza Media. OptimIT was among the first companies in the market to undertake project of such significance. The goal was to enable easier and faster publishing and content sharing between different publications/portals. Successful cooperation and maintenance of complex portals such as Jutarnji list, Gloria and Sportske novosti continues to this day. Additionally, OptimIT expanded maintenance and support for three new portals Euroactiv, Novac and Živim.

As one of the largest publishing and media companies, Hanza Media (until 2016 named Europapress Holding – EPH) operates over twenty years in Croatia and South-eastern Europe. Its portfolio contains over thirty-five web and mobile portals developed on various platforms and technologies. The Customer requested modernization and migration of all web portals in portfolio to one single platform that would support large amount of data and different content management options. In 2010 we joined mutual development and integration project of existing web portals (Jutarnji list, Autoklub, Sportske novosti, Glorija and Globus).

Successful cooperation and maintenance of the complex web portals such as Jutarnji list, Glorija and Sportske novosti continues to this day.

Hanza Media requested a single platform that could support enormous amount of data while posing as reliable, secure and simple solution.

Long-term experience in working with Escenic and JEE technologies resulted in development of multi-functional platform, vastly scalable and able to support massive amount of data which can be easily managed.

New infrastructure was completely set up within mere seven months including successful migration of both web and mobile version of portal Jutarnji list. Over 300.000 articles written between 2002 and 2009 were migrated to new Escenic platform. Platform offered new editorial functionalities for both journalists and editors which include uploading, reviewing and publishing of articles, as well as multimedia. 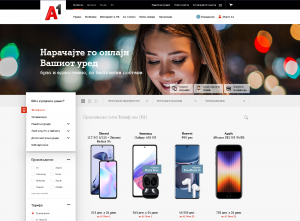 New Webshop for A1 Macedonia